Beautiful, mysterious painting by the iconic Canadian artist Lawren Harris (1885-1970), who also helped to found the ground breaking Group Of Seven. I hope to be posting more of his works, along with more works from The Group Of Seven.

This painting is titled Ice House, Lake Superior and was painted in 1923.

You can find out more about this artist with this link:
https://en.wikipedia.org/wiki/Lawren_Harris

The iconic WPA! The New Deal program to try to put Americans back to work in the Great Depression. The dignity of work, how it builds confidence, and its connection to Progress.

What also made the WPA unique and special, is that it also included the arts. Artists, architects, writers, were also employed, to help move the nation forward.

In the weeks to come, I will be showcasing some of these works. In some cases, I have restored the works from the originals and made prints which will be available as letter sized prints.

This particular work has been restored and is available on my Etsy site, or you can contact me directly if you are interested:
philgennuso@gmail.com Go West Young Man, a famous saying, that had been handed down through
the generations, a final expression perhaps of Manifest Destiny. And for us on the East Coast, the West always meant California!

At that time, my own home state, New York, was the most populous, and
wealthiest state. And New York, while not Conservative, was in play, both for Republicans and Democrats.

But California was the dream, the place where many new fads started, included those that were crazy, and it just kept growing!

Today of course it is a behemoth, a world unto itself, and people are starting to trickle out. All things in life ultimately are cyclical and California probably is no exception.

One of the works in my new Ebook, Horizons. Original version posted a few years back.

This work can also be ordered as a letter size print from me directly:
philgennuso@gmail.com

The Eight, a linocut, which depicts an overhead view of rowers racing along the Thames in preparation for the annual Head of the River Race—an image the artist saw from Hammersmith Bridge, located near his London studio.

Co-founded the Grosvenor School of Modern Art in London in 1925. He was also a successful architect and teacher.

A classic Modernist print, with strong lines, and beautiful, bold colors, capturing the motions of strength, and grace, typical of the sport of Rowing.

August Mack (1887-1914), German Artist, prominent member of Der Blaue Reiter, commonly associated with Expressionism, though he really combined many styles of the time including Fauvism, Neo-Impressionism, Cubism, and of course, Expressionism. Quite an independent, talented artist, who tragically died in the Great European War, in 1914.

This painting, Still Life With Palm, painted in 1910, in many ways embodies all of his influences and passions. It is a joyful painting, exploding with color, passion, form, and style. I post this both in memory of August Macke, and as a positive message for the coming week, to our somewhat beleaguered world. This is a print I created based on the incredible oil painting, Pittsburgh, by Louis Lozowick (1892-1973), currently in the Whitney Museum, New York.

Louis Lozowick was born in Russia and came to the United States in 1906. He studied design and went on to travel across the United States, immersed in and fascinated by the emerging technology and culture of a burgeoning industrial America. He then went to Europe where he created a series of paintings on these topics. This oil painting is estimated to have been created between 1922-1924. 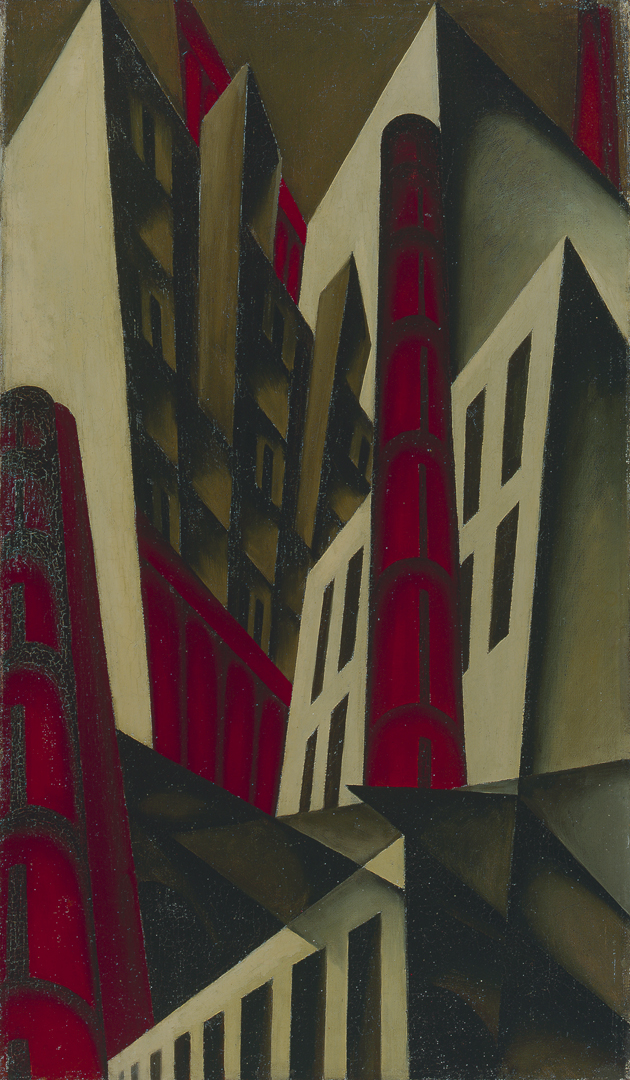 As you can see, I added quite a bit of color to the original to make it work as a print. The original uses some of the techniques of the Expressionists, and the Cubists. You might say, I added some of the coloring of the Fauvists! The original is a bold work, and I hope I captured some of that boldness on my letter sized print reproduction. Certainly folks seem to like it!

Print can be ordered here: